On my mission to show 3" Thorin the sights of Nottingham, home of Guy of Gisborne, we have been to see Wollaton Hall, where Thorin suggested having some of the resident deer for lunch, and today, we've set the sights on the town itself. As my apparently too seldom used car decided to have very a flat battery, we had to take the bus in, something which 3" Thorin found very intriguing ... He thought it was a big, yellow dragon (is EVERYTHING a dragon to him?!) and we were transported in its oddly transparent belly. Just how do you explain the concept of modern public transport to a dwarf king from a fantasy world far, far away a long, long time ago?

I have seen many a mighty city. This does not strike me to be particularly impressive.

Hey, steady on, I live here, you know. And there are some nice architecture around here, honestly. Look, here's one:

Fascinating. What else is there to do around here? You mentioned we could get a flagon of ale in this city, so show me to a tavern.

Well, there are a few options of some very old pubs in the city centre. The Trip, or Ye Olde Trip to Jerusalem, dates back to 1189 and is partially carved out of the sandstone rock by the castle. The Old Sal, or Ye Olde Salutation Inn on Maid Marian Way, is from 1240. So you never know, maybe Guy of Gisborne actually frequented one of them!

If it was a high class establishment, there is no doubt he would have felt parched and ready to down a pint somewhere.


There are sandstone caves in Nottingham?

Yes, all over. Or, rather, all under. For instance, there is a cave system underneath the Old Sal. It's said they're haunted by the ghost of a little girl. In fact, you can actually go on a ghost walk around the city centre. It's really fascinating, and you learn a lot about the history of the town.


Wraiths do not frighten me. No, I am dishonest. They do frighten me, but I do not let that fear cripple me. Fear might grip a man's heart and turn you cold, but it can not break a king.

Good. So you wouldn't mind giving the Cursed Galleon in the Trip a dusting then? It's said that if you clean it, you die a mysterious death. That's why they wouldn't allow anyone to clean it, and have now encased it in a glass box so that no one cleans it by mistake, or have unsuspecting pub-goers have centuries-old dust fall into their drinks.

Dwarves are not sea-faring folk. We much prefer a cave, and these caves of which you speak intrigue me. Show me some of them!

Certainly. If we go to Broadmarsh, which is one of the city's two shopping centres (the other being the bigger Victoria Centre), we can go to the City of Caves. It's a tourist attraction, where you get to go on a guided tour of the sandstone caves underneath the city. Can you imagine that they had a tannery down there back in the olden days?

I would not like to imagine the smell. As for caves, they can be excellent for hiding.

Indeed. They were actually used as a bomb shelter during World War II.


While these caves are nowhere near the grandure of Erebor or Moria, I suppose they have a certain charm ... if you are a human. Maybe I should give out some hints on how to better their underground dwellings?

Or maybe we move on? We don't have time to visit the Galleries of Justice today, unfortunately, which is a shame, because that's a great place to visit. You need to be on a guided tour, but it's well worth it.

I am sure we can do without looking at criminals today, but thank you for the offer.

There are no criminals there today. It used to be a prison and a court, but that was a long time ago. At least the prison bit was - I think they only stopped using the court in the 1980s. Then again, if you change your mind, Nottingham is famed for its, ehh, outlaws.

Is this about that Robin Hood person again?

No seriously, you should see the crime statistics. Nottingham tends to be on top. But it really depends on where you are in town. The worst areas you can just avoid going to. The so-so ones aren't much worse than anywhere else, I don't think, and other parts of town are on the top ten for places where it's great to live!

We should go there.

It's basically Rushcliffe Borough Council, where we used to live.

And you moved out of there? If I lived in such a nice part of the city, why would I choose to leave it? Was there a dragon?

Uh, no. See, there's that thing called "house prices". You don't get a lot of house for your money in West Bridgford, which is why people sometimes call it "bread and lard island". You spend all your money on buying a house, so you only have money to buy bread!

Houses are dear, then?

Technically, they're slightly cheaper than the national average, I think. But yeah, we wanted a bigger house and even though it would have been nice to stay in West Bridgford, we upped sticks and went for a bigger house for less money somewhere else.

Yes. Look, all of this is terribly interesting, I'm sure, but unless you make Kirstie Allsopp appear within the next few seconds, I'm off to find myself a tavern.

Wait! Okay, I'll shut up and take you to Market Square.


Why? Is there a tavern?

Well, yes, but if you're lucky, there's a farmers' market on. If it was before Christmas, there would be a Christmas market. In the summer, they turn the whole thing into a sort of seaside resort, where they ship in lots of sand and things.

Nottingham does not strike me to be within gazing distance of the sea, so why would they do something like that?

I have absolutely no idea, but people seem to enjoy it.

Less talk, I am getting thirstier by the minute.

All right, all right. Let's head up to the castle.

Oh, where Guy of Gisborne skulks about?

... Nottingham Castle looks different than I imagined. A lot different.

Yeah, it's disappointing, isn't it?

The old medieval castle, the one we would all probably like to have been there, was destroyed in 1649. In the mid-to-late 1670s, a mansion was built on the foundations of the previous castle, but it burned down in a riot in 1831. The present castle mansion was built in the mid-1870s. It's now home to a museum and an art gallery.

And flagons of ale? 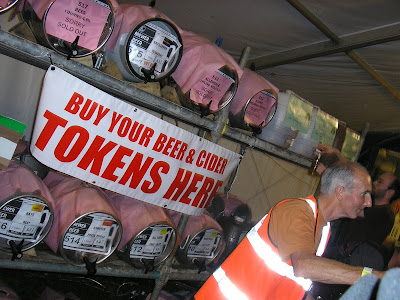 Well, for the past few years, Nottingham Castle has played host to the Nottingham Beer & Cider Festival, organised by the Campaign for Real Ale (CAMRA), so yes. It's a very busy event. We couldn't go last year because we were busy driving around Europe and trying lots of foreign beer.

Your human art does not interest me, but this beer festival certainly has a nice ring to it. You can drop me off there, and I will send you a pigeon or something when I am ready to be collected. 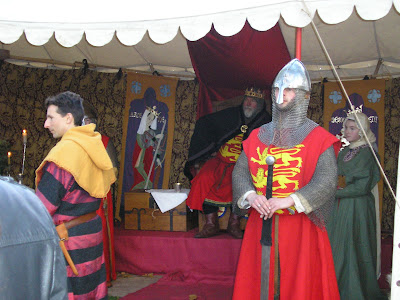 P.S. I probably should have told him the beer festival is actually held in October, not March ... but then I'd need to tell myself the same goes for the Robin Hood Pageant. Ahem.
P.P.S. Here are the links to the photo galleries: