Showing posts from September, 2009
Show All

What Kind of Reader Are You?

- September 22, 2009
Well, apparently... What Kind of Reader Are You? Your Result: Obsessive-Compulsive Bookworm   You're probably in the final stages of a Ph.D. or otherwise finding a way to make your living out of reading. You are one of the literati. Other people's grammatical mistakes make you insane. Dedicated Reader   Literate Good Citizen   Book Snob   Fad Reader   Non-Reader   What Kind of Reader Are You? Quiz Created on GoToQuiz Yup, sounds about right. ;)
Post a Comment
READ MORE »

A bottle of Boxleitner, please! 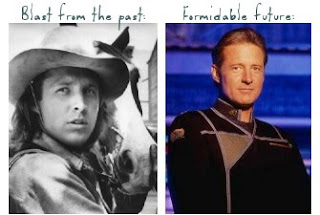 When I was growing up and TV was showing re-runs of How the West Was Won , my sisters would swoon over Luke Macahan. I'm not sure I quite agreed with them, because by the time I was about 9, I already preferred MacGyver over Brendan Walsh, and besides, the only Western thing I ever really got into was the Lucky Luke comic books. Some years later, I happened upon Babylon 5 . To my surprise, handsome starship captain John Sheridan was in fact Luke Macahan, 15 years later! Now what is it they say about fine wine? They get better with age. If so, is he a red, a white or a rosé? Save me a crate of each just to make sure! IMDb tells me he was about 29 when he played Luke and mid- to late 40s as Sheridan. The whole uniform thing probably played a part as well, because handsome men in uniforms... squee! Last thing I saw him in was probably Heroes , and I really don't object to seeing him there again, because even though he'll be 60 next year, he's still one heck of a hands
2 comments
READ MORE » 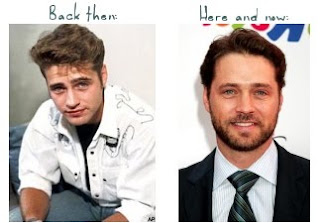 Had Sci-Fi Channel on during the weekend. Saw parts of a film about some sort of rip in time and space that threatened to end the whole universe. Termination Point (2007) . It took me quite some time before I suddenly realised I had seen one of the guys before. Turning to my Squeeze (the husband), I said, flabbergasted, "is that Jason Priestley?!" Indeed it was. The guy turned 40 less than a fortnight ago, and I must say I was pleasantly surprised. Didn't care much for him in Beverly Hills 90210 , which I never saw that much of anyway back in the day, or even Teen Angel , which I DID see, so I must say, he's looking decidedly more appealing to me at 40 than he did at 20. Verdict: Time has been kind indeed! But that's just me. Or is it?
1 comment
READ MORE »
More posts