Showing posts from December, 2010
Show All

Tonight, in an hour, the UK will pass from 2010 to 2011. Almost half the world is already there, in fact! I hope 2010 has treated you well, and even if it hasn't, I hope 2011 will be (even) better. :) Here's a quick re-cap of the year of The Squeee . The Squeee in 2010 - A year of unabashed fangirling January opened with the All About the Brontës Challenge , where I set to work straight away, listening to some old radio plays of Jane Eyre , watched the 1996 film adaptation of the same and finished reading Wuthering Heights for the very first time. I also wrote about my visit to Haddon Hall the year before, and had ideas on how you might be able to make sports interesting , because let's face it, it's not exactly all that interesting. I also discovered I was Marianne Dashwood , even though I don't really play the piano. February announced the first International Magic Day , the blog got itself a makeover, and we were being spoiled rotten by Mr. Armitage n
1 comment
READ MORE » 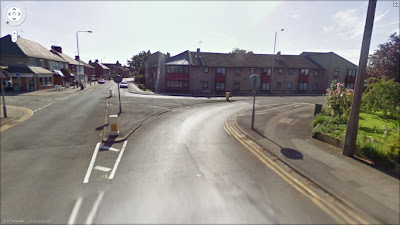 Humber Road, to be precise. He was walking down it, in broad daylight. Right about here. Nice and sunny day too, like this. And why was I sort of having a conversation with his "manager"? And who was I walking with? And why was his manager (a man) on Twitter under a fake name - a random woman? It was very peculiar indeed. And if it sounds a bit weird, that's because it was a dream. Had it last night. For some reason, I ... oh hang on. I remember now! I was walking down said fairly non-descript street in the Nottingham suburb of Beeston together with Nat from the Richard Armitage Fanblog , for some reason. Perhaps because I don't know what she looks like in real life is the reason why I can't remember what she looked like in the dream? Like this, and with jeans. But in the flesh. Gorgeous isn't a strong enough word. We came upon Richard Armitage's manager, who was also walking down the road, and we spoke of his charge. And speak of the handso
6 comments
READ MORE »

Yuletide blessings to one and all!

This morning was a special event: the first full lunar eclipse on the Winter Solstice for about 400 years. In Nottingham, there was a solid cloud cover, so not much to see, unfortunately. Also, I woke up with my right foot hurting like the blazes, so I couldn't try to see if I could spot it anyway. This is what a lunar eclipse looks like, if you haven't seen one before: First time I heard of one was maybe ten years ago or so, when I decided to set the clock in the middle of the night to watch it. I thought it would be a quick thing, like a solar eclipse (never seen one - there was a partial one in Sweden once, but again, cloud cover ... with rain), but it took such a long time that I went back to bed. When I got up around 6 or 7, the moon was still red! It goes on for hours ! If you have the time and patience to wait all through it, or even just a few minutes, it's an amazing astronomical display. :) I thought that I wouldn't join in with the Christmas wishes this
3 comments
READ MORE »

- December 12, 2010
Okay, let's start with one that didn't really work terribly well ... Epic Movie : And one that sort of worked ... Kröd Mändoon and the Flaming Sword of Fire : And one that looks like it could be a heck of a lot of fun when it comes out, Your Highness . Enjoy! :)
Post a Comment
READ MORE »

With regards to the recent cold snap ...

What happens when Britain has a sprinkling of snow It's been cold and snowy in Britain recently (although today and during the weekend, we're going to have about +5°C, so nice and relatively warm), of course, being from Sweden, I've had a lot of "but of course, you're used to much worse!" comments. Which is true. -17°C certainly won't break any cold records even in the part where I'm from (which is around Gothenburg on the west coast, so definitely not "oop North"). However, Sweden has a neighbour in the east, where it does get very cold in winter. Because if you think even -20°C is cold, think again. The Finns are decidedly unfazed, because they're well hard, innit. No really, they are. Which made me think of a funny list I read ages ago, which I managed to track down and then translated: 15°C - It does not get hotter than this in Finland, so we begin here; the Spaniards put on caps, winter jackets and gloves. The Finns sunbat
4 comments
READ MORE »

Detective fiction or romance? Any preferences?

Here's something I wrote for a creative writing course. These were our instructions: You will try writing two different versions of the same story. The first story should be a detective story; the second one a romance. Following is your topic: two people meet after having been separated for 20 years. One of them has stayed in their hometown, and lives a traditional family life; is married and has two children. The other person left home in her/his early twenties and experienced various things that you are free to imagine. /.../ It should be clear to the reader why they meet again after all these years. There must be a conflict of some kind. Is the conflict something that happened recently/is about to happen, or is it an old conflict that has been going on for decades. It couldn't be more than 400 words either, but I changed a few bits to post it here (according to the feedback the teacher gave me at the time), so it might be slightly different than it was to begin with. An
2 comments
READ MORE »

- December 07, 2010
Was going through Marvin (the desktop computer) to find some files, and came across this, which I believe was posted on Facebook a couple of years ago or so. So not necessarily very up-to-date, but anyway. Here goes: 1) What author do you own the most books by? Technically, Carolyn Keene, but on the other hand, they’re not all mine and besides, they’re all at my parents’. Seriously though, we’ve got probably 100+ Nancy Drew books! Sheer number of books aside from that … Bengt Linder. My collection of books about Dante and Tvärsan is almost complete. :D 2) What book do you own the most copies of? Hmm. I’ve got a few doubles of Jane Austen books now, as I decided to get a new batch from the same series (Wordsworth Classics) to make it look nice and consistent. 3) Did it bother you that both those questions ended with prepositions? Prepo-what-a? :P
3 comments
READ MORE »

I was googling to find a picture of Ciarán Hinds as Aberforth Dumbledore. Found this: Has a thing for goats. Hence the goatee? Har har. THAT'S Ciarán Hinds?! But but but ... it looks nothing like him? Hard to judge by just the one picture. Maybe it will be clearer in the actual film itself. But still, looking at that photo, it really looks like someone else? THIS on the other hand: Yup, that's definitely him. Oooh one of the Mr. Rochesters with a wand. I could swoon for less! Either way, I can't wait for Harry Potter and the Deathly Hallows: Part 2 to come out. While waiting, I really should be working on the review of Part 1, so I can gush over how brilliant it was. Yes. But first, sleep. EDIT: Bright and early (and very cold) morning, and a good night's sleep later, I've realised where the confusion lies. Aberforth Dumbledore, the character, is only shown in Part 1 as an eye glimpsed through the mirror Sirius Black gave Harry Potter. Harry thinks
6 comments
READ MORE » 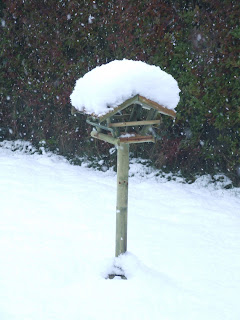 Another day full of snowing, so I thought I'd share what it looks like outside the house at the moment! There's about 4-6 inches or 10-15 cm or so here, and temperatures are set to drop. Nice afro there, bird table! I also put together a little video for illustrative purposes! :) What's the weather like at the moment where you are?
5 comments
READ MORE »
More posts