Showing posts from January, 2010
Show All

It's always fun to go places where they've filmed things, especially if it's something you're really into. For instance, I think I'd die and go to fangirl heaven if I were to go to Minyip in Australia (the town of Coopers Crossing in The Flying Doctors ). Australia is a bit far to travel, but Derbyshire isn't, it's just next door. :) "the most complete and most interesting house of [its] period" Growing up, every summer, we used to go on family holidays in the caravan and travel around Sweden and go to museums, old houses, glass-blowing places and a number of other things. It wasn't just swimming and eating ice cream, no, we got to do Boring Cultural Things. At the time, I wasn't perhaps not very appreciative of it, as I never had any stories in class that quite measured up with my classmates who went to Crete or the Canary Islands for their holidays. What had I done? Gone gallavanting up a boring mountain up north somewhere and seen so
4 comments
READ MORE » 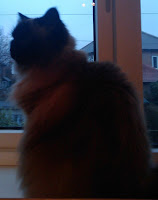 Aye, I'll jump on the bandwagon too! :) Although, instead of pictures of RA, I thought I'd show some pictures I took this morning, as I wanted to try out the camera on my new old mobile phone. (I don't buy mobile phones anymore, I just use the Squeeze's old one when his contract gets upgraded. I didn't want the previous one, so haven't had an upgrade for quite some time, so yay, the new one is pretty damn cool!) This is Daisy. It's not a very good picture, admittedly, with the light coming in through the window and all, but hey, we'll ignore that. She's about 10 years old or so, but we don't know for sure. She was a stray originally, who one day just appeared in the cellar of a friend's house. They advertised and went to the police and things but she wasn't chipped and no one came forward to claim her, so they kept her. Three years later, I came along and wanted a cat, and seeing as how the new-born stable kittens (of which I was to get
1 comment
READ MORE »

I was listening to Chris Evans on BBC Radio2 the other morning and heard them talking about Sharleen Spiteri and the song "Xanadu", and if it was a hit or a miss sort of thing. Didn't hear the song itself, but as the first single from her album Melody (2008) showed up in my playlist, I was reminded, and went to see if I could hear it. Found this, from the Graham Norton Show on New Year's Eve:
3 comments
READ MORE »

Another WH in production

I was searching IMDb for info about Wuthering Heights '98 as I was going to review it, and while doing so, came across the entry for Wuthering Heights (2010) , which is currently in pre-production, apparently. Yet another version, and this one just a year after the last one?! Says it will be shot in Scotland and Ireland and star Gemma Arterton as Cathy and Ed Westwick as Heathcliff. So, who are these people? Let's have a look.
4 comments
READ MORE »

How to make sports interesting

- January 17, 2010
(Originally posted Wednesday, July 09, 2008 over at my personal blog.) If you're like me, you couldn't care less about sports. So what to do when someone around you is into it and you for some reason or other have to sit there and watch it with them? How do you transform it from a boring game of no consequence to something whose outcome you are mildly interested in finding out? Here are a few pointers...
2 comments
READ MORE »

Which Austen heroine am I?

"You are Marianne Dashwood of Sense & Sensibility! You are impulsive, romantic, impatient, and perhaps a bit too brutally honest. You enjoy romantic poetry and novels, and play the pianoforte beautifully. To boot, your singing voice is captivating. You feel deeply, and love passionately." Take the Quiz here! Umm. I took piano lessons for a year when I was ten... that's not "beautifully", that's "yes, you do play only a little". Captivating singing voice? I do okay on Singstar, but I wouldn't call that "captivating" by any stretch of the imagination! I also have an intense dislike of poetry. I once bought the collected poems of DH Lawrence in a fit of "I like his writing and he's a LOCAL!" (five years in Nottingham and I've still never been to the DH Lawrence Heritage site in Eastwood, 20 mins from where we live now *cough*) only to remember, when I finally opened it to read, that I find 98% of all poetry in
4 comments
READ MORE »

- January 14, 2010
I just saw a TV commercial from Santander... and I wasn't paying attention (as we were discussing dinner options) but as there was a pause, I caught the end bit and thought "hang on... that voice... is that RA doing a voiceover?" He's done voiceover work before, and goodness knows he's got a good voice for it. I'll have to keep an ear out for the ad and have another listen. :) If anyone in the UK has heard it, what do you reckon, is it him? EDIT: 'Tis him. Who else would it be with That Voice? Have a listen/look: (Thanks for the link, Maria! :) When I tried to find it on YouTube, I didn't watch the one that said "Lewis Hamilton" as I was expecting it to have a title about RA... which it didn't, of course!)
6 comments
READ MORE »

In an article on the NOW Magazine website, namely this one: NOW Magazine // Movies // Q&A: Sam Neill , there's the following quote: The movie’s bloodthirsty quality makes a nice change from all the Twilight stuff. To be honest, I don’t particularly like a lot of them. For “vampire,” read “emo” – the disaffected, boring youths I put up with because I have teenagers. These people come drooping through my door, and I don’t particularly care for them. When they get to 21, they’ll be fine, but in the meantime they like vampires – and boring vampires. Aww, you da man, Mr. Neill! :D If I didn't love you already! He's in a vampire movie (with proper vampires, the fanged, non-sparkly kind who don't do garlic, mirrors or sunshine) called Daybreakers which premiered here in the UK yesterday. We're thinking of going to see it on Saturday. A Sam movie the Squeeze actually wants to watch! The movie also features Ethan Hawke and is probably more the Squeeze's cuppa te
Post a Comment
READ MORE » 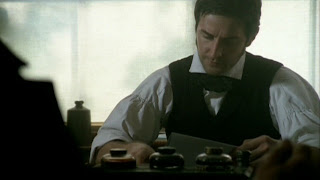 First post of the year, yay! Hope you all had a fab New Year's! :) Safely back in the UK again (OMG, we have snow!), I thought I'd kick off the year in a slightly unusual fashion, by posting something I've written. Err. Okay, yeah, I normally post stuff I've written (duuh), but I mean a story. Or not strictly a story, it's more of a letter, and it's a sort of summary of a storyline in a roleplaying game. Reason for posting, more than feeling like it, is because I love the whole angst-ridden loveliness of the character, and it's a feeble excuse to post gratuitous pictures from North & South , as the letter-writer happens to bear an uncanny resemblance to Richard Armitage. *cough* Pure coincidence, as it happens, as I decided what he looks like before I decided to cast RA in the role. ;) (The blackbird thing is his nickname for her, because her name is that of a blackbird, in Latin.) But anyhoo, tell me what you think, I love to get feedback / construc
3 comments
READ MORE »
More posts