Showing posts from October, 2012
Show All

Time Trax is officially on DVD

BEHOLD!!! :D Things that make a simple fangirl very happy: finding out that Warner Bros have recently (earlier this month), finally, after all these years, decided to make the 1993/1994 sci-fi TV show Time Trax available on DVD. The most disappointing thing thing is that it's only series one. C'mon WB, you only ever made two - would it have killed you to release them both at the same time as a box set? :(
Post a Comment
READ MORE »

Everyone hates Joffrey. If you watch Game of Thrones in particular, or perhaps if you're just reading the books on which the TV series is based, you're likely to have taken a sort of anti-shine to that little bastard. As well you should, because Joffrey is not a nice person and is completely devoid of any redeeming features. In fact, he's the epitome of a complete dick, git, douchebag, jerkwad, and so on. But the actor that plays him is the complete opposite, I only just discovered, and because he's made us all hate Joffrey so much, he's obviously rather convincing as an actor! Okay, I didn't expect the actor to be a complete and utter little shit in real life just because he plays one on telly, but you know, it's nice to know that he seems to be a really nice guy in real life.
2 comments
READ MORE » 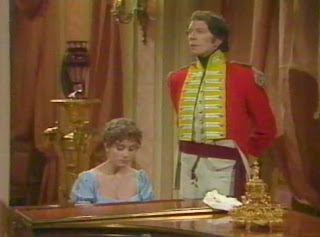 I've often wondered why in Jane Austen the interesting new acquaintances of the heroine's age are often men rather than women. If the women are bad, they are petty, malicious, proud and inconstant. If the women are good, they are giggly, unintellectual, sometimes sensible, never really deep or profound. (We're not talking about the heroines themselves). Perhaps Jane Austen preferred the company of men? (We seem to see quotes from her letters favourable things about the gentlemen she met). Was she trying to tell us something by having the heroines be friendlier (in a platonic sense) to men than women? Look at Pride and Prejudice . Miss Bingley is a petty malicious slanderer who thinks she's greater than the less well-off Elizabeth. Charlotte Lucas is sensible but then marries the idiotic Mr Collins. Lady Catherine de Bourgh is a vulgar, arrogant interfering old woman. The only exception is Mrs Gardiner, but she's Lizzie's aunt, so that doesn't count. The ge
Post a Comment
READ MORE »
More posts